COVID-19 is a risk to all health loving people throughout the United States and Worldwide. The board of BVI along with our grand sponsor, Pioneer Title Agency, acknowledges these health risks. Please make sure to watch for updates and eblast as we make our expanded grand plans and other projects.

The most unique physical fitness challenge (or friendly fitness walk) in the USA! Bisbee 1000 The Great Stair Climb is arguably one of the most unusual and challenging events in the world. The 4.5-mile course features nine staircases (over 1000 total steps) connected by winding roads. While enjoying the challenge, runners and walkers alike see some of the most scenic parts of Old Bisbee. Take a delightful journey up the stairs and down the roadways in Europeanesque Bisbee! Online registration only, at Bisbee1000.org. Presented by the 501c3, Bisbee Vogue, Inc. Do It For Your Heart!


Our Mission: To create, promote and support initiatives that enhance the economic vitality, health and wellness of citizens in Southern Arizona. 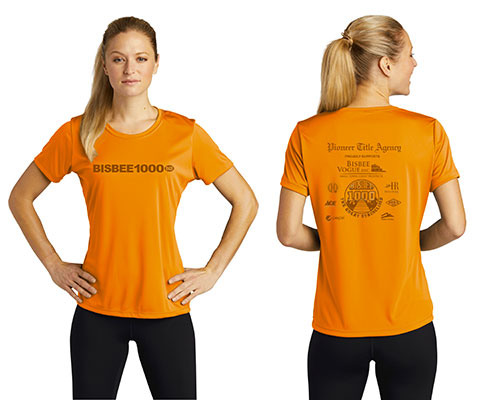 Thank you again for selling out our event! See you all October 15th. There will be a FEW extra shirts at our big After Party at the finish line at Higgins Hill Park. 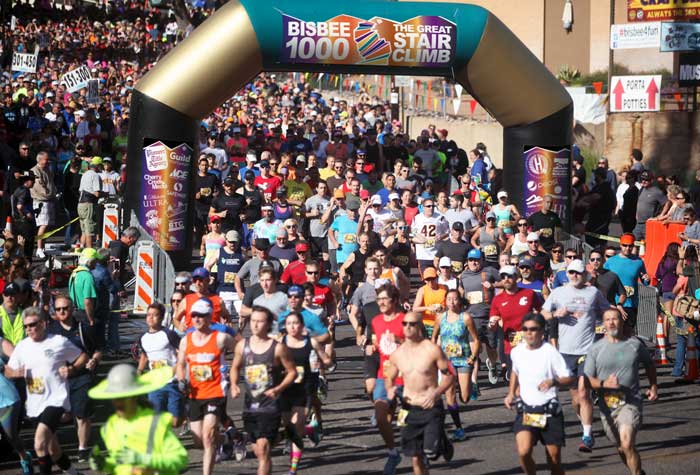 The Board of Bisbee Vogue Inc. expresses our mission with the legacy gift– "fitness court" to the citizens of Bisbee, AZ.

The most unique physical fitness challenge (or friendly fitness walk) in the USA! Bisbee 1000 The Great Stair Climb is the only outdoor stair climb in the U.S. and is arguably one of the most unusual and challenging events in the world. The 4.5-mile course features nine staircases (over 1000 total steps) connected by winding roads, with a total course elevation gain/loss of ~1175 ft. While enjoying the challenge, runners and walkers alike see some of the most scenic parts of Old Bisbee. Take a delightful journey up the stairs and down the roadways in Europeanesque Old Bisbee!

Unique to Bisbee is a system of old and deteriorating stairways that course through its picturesque hills, affording views of the town's quaint houses and colorful gardens. The stairways originally followed the mule paths worn into the terrain during the heyday of Bisbee's copper mining past. To put men back to work during the Great Depression, the Work Projects Administration (WPA) had overseen building of the stairs over those same pathways.

The ﬁrst Bisbee 1000 was held in October 1990 and by virtue of word of mouth alone, it drew 200 people. Each year the event grew at a rate that took everyone by surprise, and was eventually limited to 1,500 participants. In 2012, the Bisbee was ofﬁcially designated as an Arizona Centennial Event, joining the other featured listings in the Arizona Highways Centennial Edition. In that same year, the Bisbee 1000 received the prestigious Governor’s Tourism Award for Special Events in a Rural Area.

As challenging as the course is, the Bisbee 1000 attracts a most diverse group of participants, from children age 7 up to adults in their 80s, and people of many fitness and ability levels. Some are serious competitors out for a win, some for a brisk jaunt, and still others simply want to stroll and enjoy the spectacular views. Many dress in outrageous or silly costumes; we even have some firefighters compete in full firefighting turnout gear (despite temperatures that often hit 80+ degrees F). Although the Bisbee 1000 is its own cause célèbre, it has also been the setting for family reunions, school reunions, company team competitions, birthdays, and—on at least one occasion that we know of—a wedding proposal.

If the Europeanesque charm of Bisbee is not enough to draw you to the event, then add the dedicated efforts of the City staff, police, ﬁre departments, musicians, and citizens cheering you on your way up and down and all around our mile high city. The Bisbee 1000 is not just any race; think of it as a garden tour, a home tour, a musical extravaganza, a costume ball, one heck of a party, and a celebration of the community spirit. We hope you will join us. 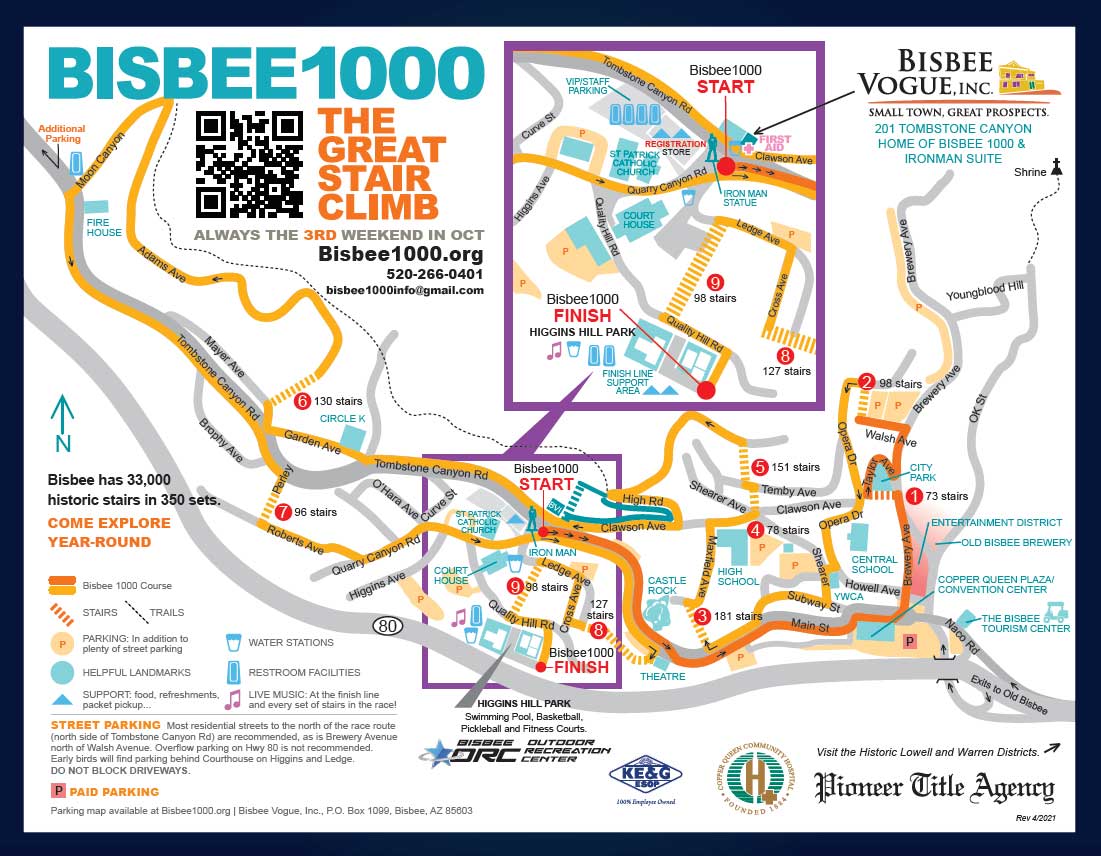 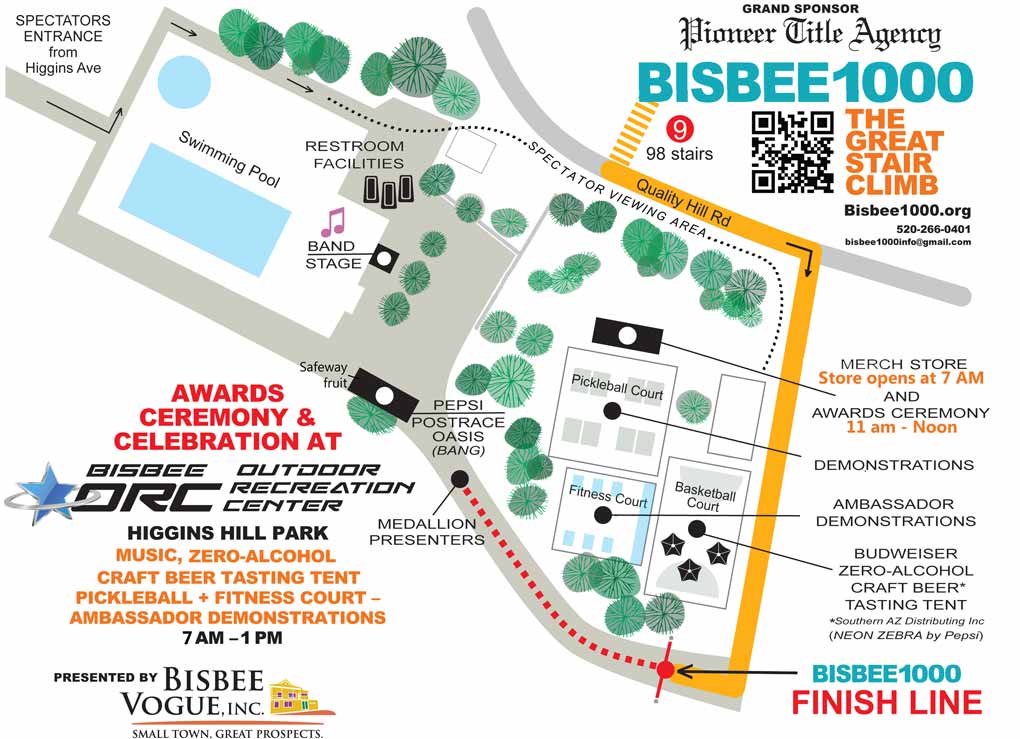 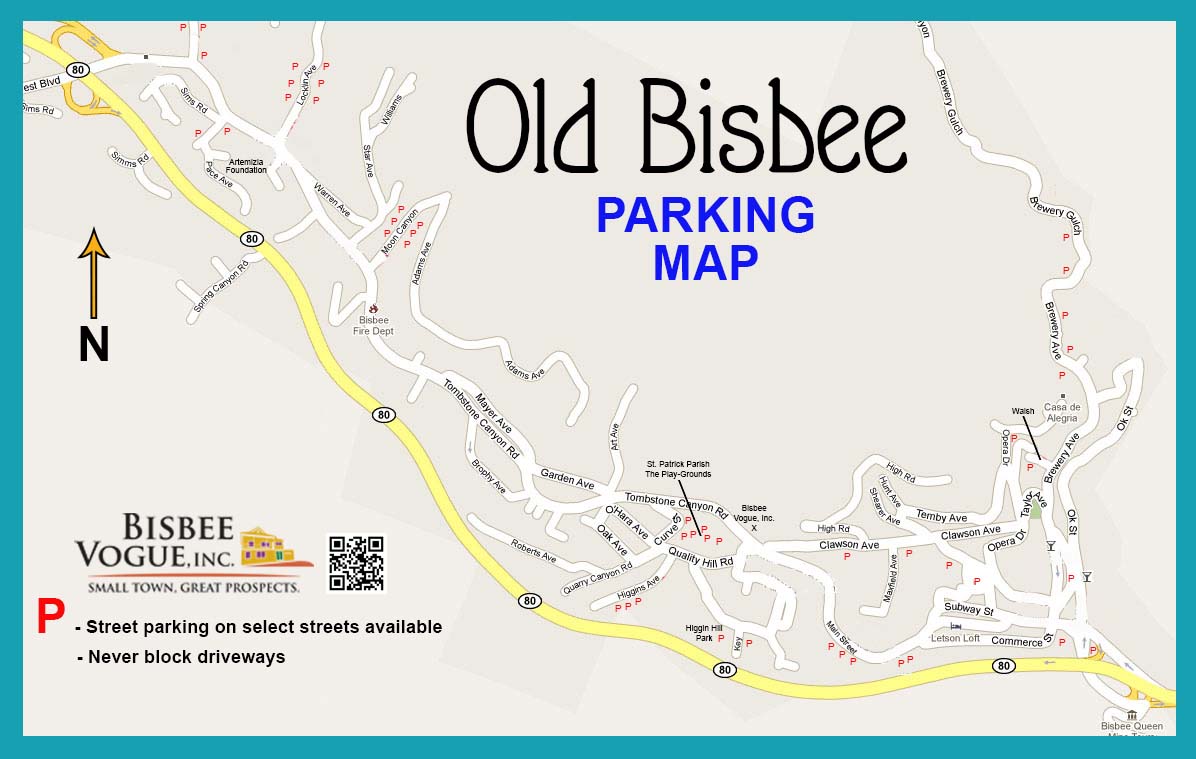 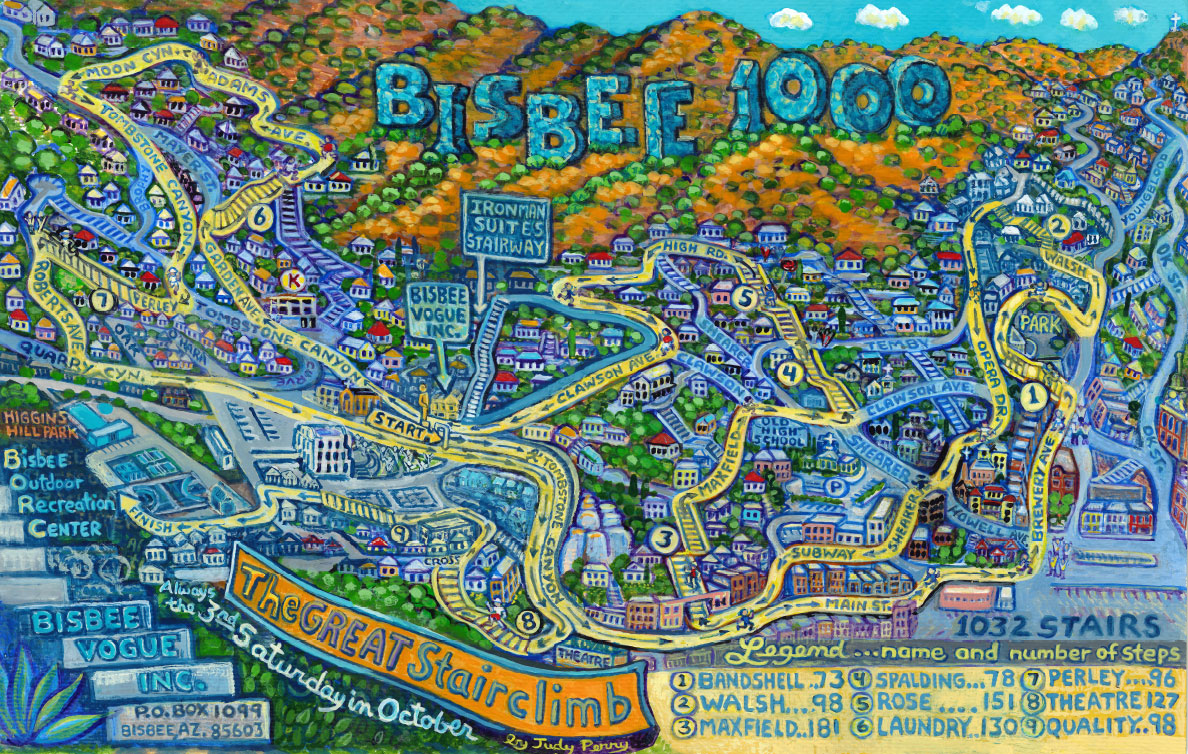 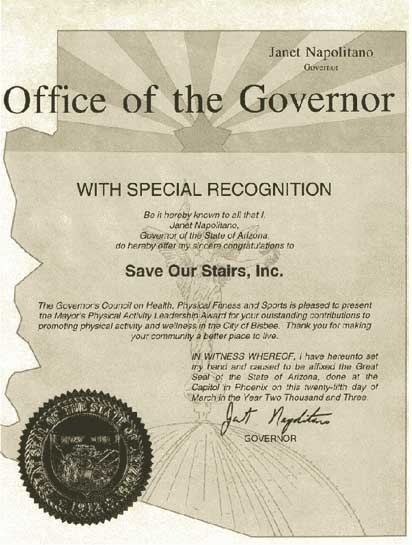 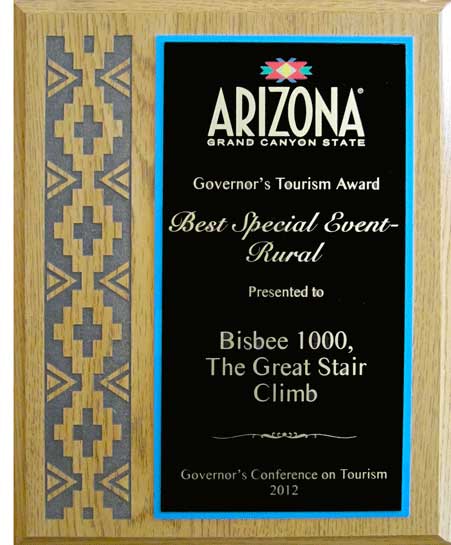 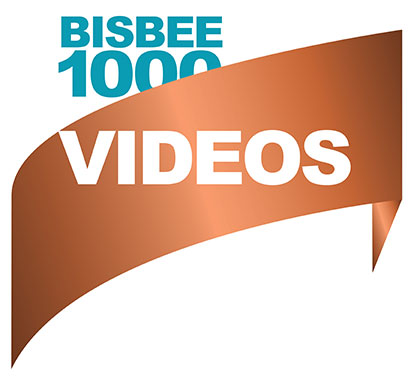 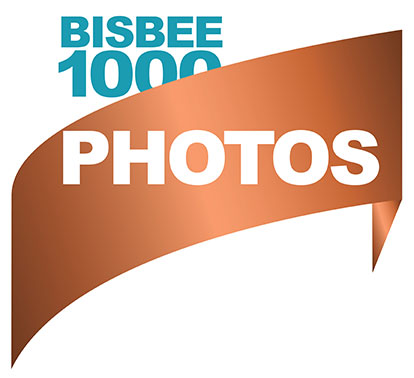 Thank you for your continued support! 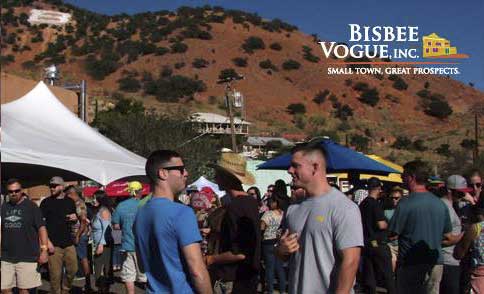 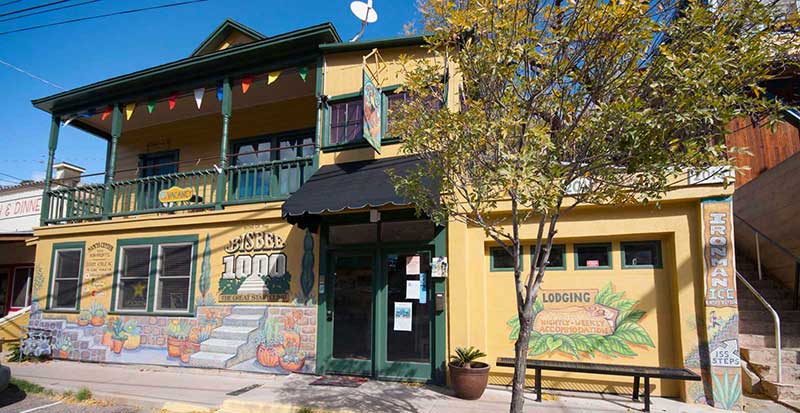